At the beginning of the school year, one of my daughter’s classmates lost her mother to cancer. My interactions with the woman were few, but she exuded generosity and was a nurturing soul, committed fully to her family. I barely knew her, but I felt the loss deeply, not only for the family who lost her, but for myself, too. I missed her dearly even though I hadn’t seen her in months and months before she passed.

There was a funeral. I quickly made the decision that we would not go. I felt like my daughter had been through enough, and since she was not close to her classmate, that going would expose her to unnecessary grief when she had already experienced so much loss already. I felt like going would be like ripping a bandaid of an injury that she didn’t even endure.

After the funeral happened, my daughter heard about it from her friends who had gone. She asked me why we didn’t go. I told her that we really didn’t know the family, but that reason didn’t sound right to me anymore. It seemed like everyone went but us. But the time for considering it was over. We missed it.

She has asked me a couple of times since then, and she asked me last night. I gave her the same reason I gave before. We were in the bathroom doing teeth and mouthwash before bed. I stroked her head and finally told her the real reason we didn’t go. “I felt like maybe it would be too sad for you.” It felt good to just say it. I knew she was able to hear it. She swished her mouthwash and used hand signals to speak to me, as she does every night, as if whatever she needs to tell me can’t possibly wait the 60 seconds it takes to swish. She shook her head and waved her hands.

“Are you saying that we should have gone?” I asked.

“Are you saying it wouldn’t have been too sad for you?”

She then walks into the adjoining playroom and sits down at her desk. She’s writing something, but doesn’t want me to look at it until she’s done. When she’s finished, she waves me over, still swishing the mouthwash. 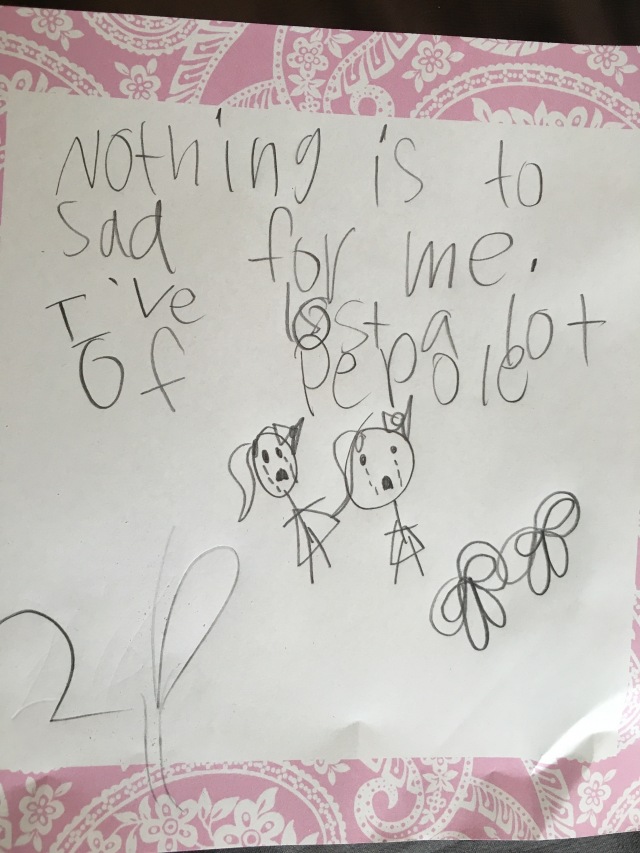 Ugh. Initially, reading that was so sad that my eyes welled up with tears. Fuck. But then I realized I was missing the point, just as I had missed the point at the beginning of the year by skipping the funeral.

She went to spit her mouthwash out and came out of the bathroom. “Are you saying that you could have handled it?” I asked.

“Yea, I can handle it. I mean, maybe if someone lost every single person they love, that would be too sad for me. But I don’t think that would happen.”

It’s hard to see your child learn these big life lessons when you’re still figuring them out yourself. But they’re more resilient than we give them credit for, and protecting them too much just does them a disservice and, frankly, kinda makes you look like a pussy in the end. I should have told her about the funeral and asked for her thoughts. I was afraid, though. I was afraid that she would want to go and then find it too sad. I was afraid that it would be too sad for all of us. That an unfair assumption on my part. Everyone in this family was slapped in the face with trauma they couldn’t control. I should have allowed her to be in control over this instead of making the decision for her.

Children reprocess their grief through each developmental stage. You’re not ever really “done” raising a grieving child. What I always fail to remember is that I have so much still to learn about how to do this with her. But I will tell you this: She’s a fucking good teacher.

About A Life After Loss

I lost my son in 2013. I lost a lot that day, but I never lost it all. I still have hope, albeit it wavers sometimes. I still have my love of writing, and I still have my humor. Let's learn how to do this grief thing right.
View all posts by A Life After Loss →
This entry was posted in Newly Grieving, Raising Your Living Children. Bookmark the permalink.